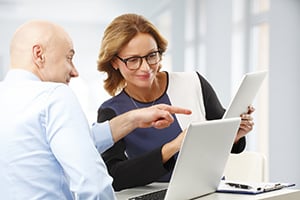 Fair Lending regulations are designed to prevent discrimination in any aspect of the lending process. As a compliance professional, your Fair Lending compliance management program is all about ensuring that similarly situated individuals are treated similarly, and the potential for discrimination to occur is limited.

In Fair Lending, discrimination is defined as the act of treating one person or a group of people less favorably than others based on a prohibited basis at any point in the crediting process.

The definition of prohibited basis varies based on the specific regulation, but the possible prohibited bases are: race or color, religion, national origin, gender or sex, marital status, age, receipt of income from public assistance, exercise of rights under the CCPA, handicap, or familial status.

According to the regulations, there are three definitions of discrimination:

Below are five scenarios that illustrate the nuances of different types of discrimination. Michael is a customer service representative at a community bank. Two calls he receives are from single mothers who both request that he waive a late fee. One woman is non-Hispanic and white, and the other is Hispanic and white.

The non-Hispanic woman is adamant about getting the late fee waived, and Michael is uncomfortable with the situation. He tells the woman that he’s sorry, and that there’s nothing he can do.

The Hispanic woman calls later and describes her situation, explaining that she had a slew of medical bills that needed to be paid. Michael listens and decides to waive her late fee, and makes some suggestions for how to avoid such fees in the future.

Yes, this is an example of disparate treatment in lending. Differences in treatment like this may be considered intentionally discriminatory, because the difference in treatment on a prohibited basis doesn't have a credible, non-discriminatory explanation.

Both applicants are approved for their loan. Did discrimination occur, and if so, what kind?

Yes, this could be considered a form of discrimination - disparate treatment - even if the discussion doesn't impact the decision to make or price the loan.

Thank you to one of our readers for helping us clarify and improve this question!

Featured Resource: Training is essential to any Fair Lending compliance management program. Get this free Fair Lending training checklist to evaluate the 9 essentials of every training program!

When Andrea makes decisions about loan modifications, she considers gross rather than net income. She makes no distinction between taxable and non-taxable income, even though non-taxable income is of more value than an equivalent taxable amount.

This is an example of disparate impact, because this practice results in a different impact on a group of people defined by a prohibited basis. Monica is a loan officer at a mortgage company. During an online application, Alex, a non-minority customer, failed to provide all the requested documentation. While working on the application, Monica called Alex to request the missing information.

Later that week, Kris, a minority applicant, also failed to provide all the requested documentation in the online application. Monica was very busy that day, and rejected the application without calling Kris, and did not offer the same chance to provide the missing information.

Margaret is interested in refinancing her home, and is told by her representative that she will be assessed a fee of $150 and that it will take 24 hours to provide an approval.

A different representative gets a home refinancing request from a similarly situated Hispanic male, Marco. Marco is not charged the $150 fee, and is approved by the end of the day.

Yes, this is disparate treatment. The lack of clear policies or practices result in similarly situated individuals receiving different treatment.

TRUPOINT Viewpoint: Discrimination is a fundamental concept in Fair Lending compliance, but that doesn't mean it is always easy to identify and understand. As we see here, there are three different kinds of discrimination, each are unique and some can occur unintentionally.

When assessing your risk, it's important to consider both quantitative and qualitative factors. TRUPOINT can help with both, from data analysis using our cloud-based TRUPOINT Analytics platform to comprehensive risk assessments, leveraging our team of experience Fair Lending consultants.  If either are missing from your compliance management program, compliance risk will increase. When you're ready, know that you can lean on TRUPOINT.

Take the next step to learn about Fair Lending discrimination and other compliance basics. Get this Fair Lending 101 info kit today!

previous Everything You Need to Know about the TRUPOINT & Ncontracts Partnership

next What Should I Do After Submitting My HMDA Data?