Redlining has once again emerged as a major regulatory focal point. Regulatory guidance and recent news both indicate that scrutiny is expected to increase in the coming months. Reviewing this recent Redlining news may be useful when prioritizing compliance for 2016.

Regulators and industry experts have been sounding a steady drumbeat since 2014: redlining is back. 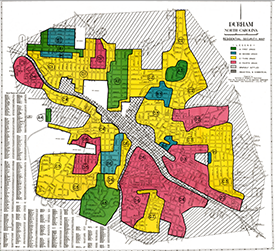 A look at recent news shows that this is true. From community groups to compliance professionals, redlining was a top priority this year,  and will continue to attract attention through 2016.

A survey of recent redlining news highlights not only industry trends and regulator perspectives, but also provides guidance and direction for compliance departments that are listening.

Let’s first take a moment to review recent redlining articles and announcements in the news.

Redlining in the News

Redlining is defined in the FFIEC’s Fair Lending Exam Procedures as “a form of illegal disparate treatment in which a lender provides unequal access to credit, or unequal terms of credit, because of the race, color, national origin, or other prohibited characteristic(s) of the residents of the area in which the credit seeker resides or will reside or in which the residential property to be mortgaged is located.” September 2014: Last September, the State of New York filed suit against Evans Bank for allegedly redlining. While Evans Bank denied the redlining allegations, the lawsuit was indicative of the renewed focus on redlining at the state and national level.

"We are looking at other banks in other parts of the state,” NY State Attorney General Eric Schneiderman said at a news conference, “and if banks do not agree to resolve these really disgraceful practices, then there will be further litigation."

November 2014: The city of Providence, RI filed a lawsuit against Santander Bank due to alleged redlining. After Santander agreed to pay $1.3 million in grants to three local nonprofits, the city dropped the lawsuit.

April 2015: On April 23, Patrice Ficklin, the CFPB’s assistant director of Fair Lending, said, "It is biblical that there's nothing new under the sun and I often think everything old is new again. So it's funny to still be talking about redlining here in 2015, and yet here we are. With regard to [the Equal Credit Opportunity Act] exams, we look at a number of areas but our principal focus is in underwriting and redlining."

Both the CFPB and the DOJ have several redlining cases in progress. Redlining also featured prominently in the CFPB’s Annual Fair Lending Report released this month.

May 2015: Wisconsin’s Associated Bank settled with the U.S. Department of Housing and Urban Development (HUD) in a redlining case to the tune of $200 million. To date, this is the largest redlining settlement ever reached by the agency.

As a result, Associated Bank is required to provide nearly $3 million to help existing homeowners repair their properties in these predominantly minority communities; pay $1.4 million to support affirmative marketing of loans in the above census tracts; commit $1.35 million for community reinvestment and fair lending education and training, and more.

June/July 2015: The ACLU’s research paper, “Impact of the US Housing Crisis on the Racial Wealth Gap Across Generations,” posited that redlining was a serious factor in perpetuating the wealth gap. In recent months, community groups and media outlets outside the bank and compliance circles (The Washington Post, Slate, and The Atlantic) have been discussing redlining with more frequency.

Some have even said that redlining practices may have contributed to the racial tensions and ultimately the race-related rioting in major cities across the U.S.  These sorts of incindiary comments are designed to sell magazines, but as compliance professionals it would be remiss to completely ignore the sentiment expressed by these articles.

If the proposed consent order is approved, the bank will have to pay $25 million in direct loan subsidies to qualified borrowers in the affected communities and $2.25 million in community programs and outreach. They'll also pay a $5.5 million penalty. With its approximately $27 million fine, this is the CFPB and DOJ's largest mortgage redlining settlement to date.

The proposed settlement was finalized in October. With it came evidence that the regulators are relying more heavily on data analysis to identify redlining.  Technology advancements make it much easier to analyze lending both statistically and spatially and that is exactly what the regulators are doing.

The DOJ also reached a much smaller agreement with Eagle Bank and Trust Company of Missouri in September, resolving redlining allegations.

November 2015: In Acting Assistant Attorney General of the DOJ Vanita Gupta's remarks during the recent CRA and Fair Lending Colloquium, she re-emphasized that the DOJ is prioritizing Fair Lending and Redlining. "Fundamental to the promise of equal opportunity is the right to access credit on an equal basis," she said. "We have shown that we will use all tools in our arsenal to ensure that every eligible person has access to credit opportunities, free from discrimination. On that point, I want to make sure one thing is clear:  this administration sees fair lending as an essential component in ensuring a sound, stable banking industry."

Redlining repeatedly arose as a priority in her speech, along with pricing disparities and subprime mortgage loans.

"Redlining—as another example—continues to be a problem. As the subprime boom fades, redlining for prime loans is coming back into stark focus," she said. "In our most recent redlining action, a case against Community State Bank in Michigan, the pattern of discrimination was clear...Both statistically and spatially the discrimination stood out."

Ncontract Viewpoint:  Redlining is an important regulatory focal point and one that will persist through 2016.  Reviewing recent news, agency updates, and settlement details provides insight that compliance departments and the professionals that manage them must consider.

Though Redlining is an old regulation that many of us have dealt with in the past, changes in lending, markets and technology have regulators dusting off redlining and leveraging it more fully than ever before.  With this increased regulatory scrutiny comes the need to identify and manage your Redlining risk more efficiently than has been the case over the last several years.