The ABA’s 26th annual Regulatory Compliance Conference brought together almost 1,500 regulators, compliance focused bankers and product partners from throughout the country.  While the Central Florida thunderstorms boomed outside, inside there was a powerful whirlwind of industry observations, guidance and reunions.  Below are three quick observations from the conference that used the "Survive the Regulatory Storm" as the conference's headline. 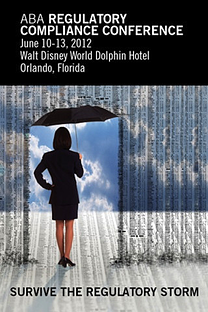 The bottom-line:  As regulatory pressures rise, the Compliance Officer’s role is critical to the success of the bank.  This is especially true in a community bank where fewer resources will be stretched and tested in the coming year.  The ABA's conference confirmed that managing time and resources has never been so important.

Finding a trusted and experienced resource, like TRUPOINT Partners, can help financial instittuions efficiently manage both time and money.  A free 15 minute fair lending risk review is a great way to learn how.